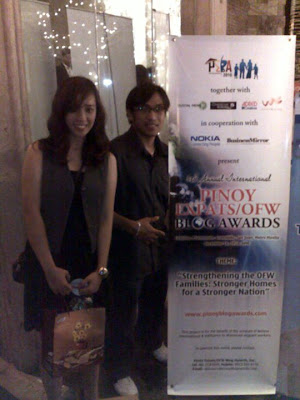 My daughter Geehan and son Roland James
It was a thrilling event as PEBA 2010  broadcast live through live stream technology as me and my wife  watched it live in real time from my computer monitor in Doha, Qatar. We can feel the suspense as heartbeat rises as the musical intro Chariots of Fire echoes the auditorium as the video teaser is played that supplement the tension as the Top 10 Blog Winners were announced.
It was a tear-jerking moment as the Top 1 OFW Blogger Winner "Animus" was announced and Dan Jacob's (Animus author) mom, Mrs. Garcia took the centerstage as tears running through her eyes accepting the award and with sobs and cracking voice congratulated the PEBA organizers and proudly held her son's trophy in her arms.
At that moment, the audience was captivated by the emotional love and pride shown by a mother, who was once a former OFW herself over her son's victory through his winning blog post entry entitled "Ang Bakal Na Ibon Sa Himpapawid", an author account on love, sacrifice and struggles against the social risk of migration in their family where once her mother was an OFW, and now he himself  is an OFW in Kuwait.
It was an atmosphere of magnanimity, a victorious event shared by both PEBA Organizers, community bloggers and OFW & Migrant workers and the Filipino families around the world. It was a reuniting moment for the whole OFW families who have witnessed the PEBA Gala Night, I myself was touched by my children's initiative in attending the PEBA night driving from Antipolo City to Teatrino, San Juan and narrating their great experience, as my daughter Geeka said "it was a great blog award experience, it's like attending FAMAS awards night". 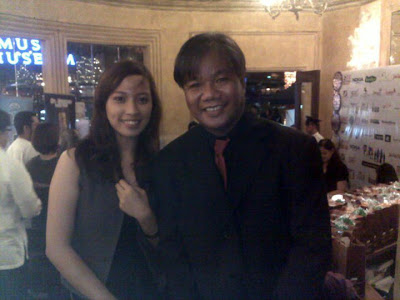 The Pope's daughter and the PEBA President

While the whole event needs further polishing to achieve perfection on its next coming year, but generally it was a huge success as the message of familial love echoed throughout the PEBA season.
We owe the success of this event to the volunteerism jobs of our PEBA Super Heroes who have offered their shoulders so others can stand, rise and shine. The unwavering commitment of Yanah, the PEBA's Wonder Woman who deserves the Super Hero Award, Arvin, the PEBA's "Blog Crusader" and our own "Lara Croft" Jen who has been the face of PEBA in our district office in Quezon City. 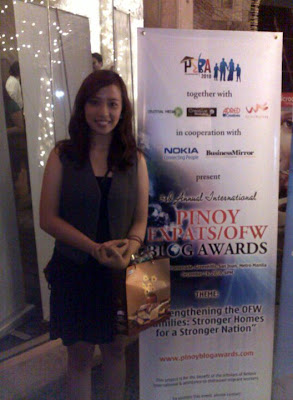 "Charmed" by the Event
PEBA's Man of the Year award must be given to Jigs "The Spiderman" who has successfully connected PEBA to the web of generous sponsors and media partners who has brought glitters to the whole event.
Kenjie "the Skywalker" and "Yoda" NJ Abad remains the guiding light over the galaxy and PEBA's "Harry Potter" Lord CM who always amaze the blogging community of his charismatic "magical power" in Kablogs and United Bloggers.
And lastly I would like to thank this year's Panels of Judges (the "Senate of the Galactic Republic") headed by Ms. Susan "Toots" Ople and Ms. Ellen Tordesillas for both OFW Bloggers and OFW Supporters Division for sharing their time, talent and wisdom in the selection of PEBA winners.

Thank you very much and Merry Christmas.
Posted by The Pope at 7:12 AM 4 comments: