In the observance of Philipines' Araw Ng Kagitingan (Day of Valor), PEBA, the International Blog Awards  annual event on its 4th Jubilee celebration, PEBA 2011 focus on the Global Filipinos homecoming  towards change with its theme Ako'y Magbabalik, Hatid Ko'y Pagbabago (I Will Return, I Will Bring Change). In support to PEBA's advocacy, the following is a repost on PEBA's official opening article for this year's International Blog Award, this is an invitation to the Global Filipino bloggers to support PEBA 2011. 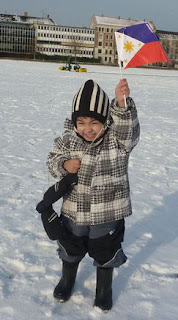 The First Quarter Storm
Note: The photo of a boy holding a flag is an official entry of  Analindenhann from Copenhagen Denmark,
©2011 Pinoy Expats/OFW Blog Awards
The first quarter of 2011 is perhaps the most turbulent days of the Overseas Filipino Workers as they witness the political revolution in the Middle East and North Africa where thousands of OFWs were caught in the middle of domestic conflicts in countries such as Egypt, Bahrain, Oman, Yemen, Saudi Arabia and Libya.

Even with these appalling events, Filipinos remain determined to continue following their dreams through migration in order to survive domestic poverty. The world could be cruel and unforgiving but also highly rewarding... because in every struggle, heroes emerge. 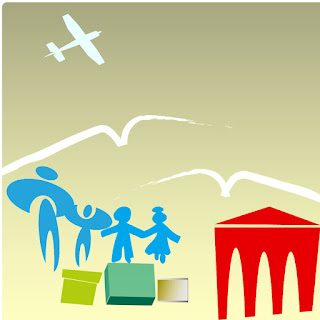 Leaving Is Not A Matter of Choice, Coming Back Is
Despite the varied reasons why Filipinos go abroad, nationalism is still evident on the narratives of the 12 million Filipinos scattered all over the world. PEBA has witnessed how OFWs take pride of our Filipino roots, our culture and our race. Filipinos abroad, after they have followed their dreams, have chosen to return, evident on how we are called... "Balikbayan." They return to share their talents, skills and fortunes in an effort to bring change to the families left behind, communities and country. Thus, PEBA 2011 is dedicated to our "balikbayans", the unsung heroes of our time. Their homecoming brings a spark of change to the lives of their loved ones and their homeland. PEBA 2011 honor them with the theme,
"Ako'y Magbabalik, Hatid Ko'y Pagbabago." (I Will Return, I Will Bring Change.) 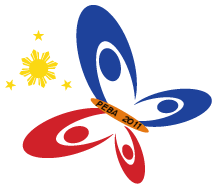 The PEBA 2011 Challenge
PEBA 2011 will attempt to remind the P-Noy administration to solicit, listen and heed the advice our OFWs who have been the forefront of finding solutions on the world’s most powerful economies. It's about time that instead of concentrating on labor-export policy, this administration start tapping the professional services of OFWs in various areas of expertise in rebuilding our country's infrastructures and basic services by offering them job positions in government offices to be administration partners in nation-building.


We call on our Filipino expatriates around the world to continue their roles as Global Ambassadors of our country in foreign lands by promoting and patronizing our locally-made products, making the Philippines the first stop destination for holidays and investing in the home country. We ask them to teach their children and their foreign spouses on the positive Filipino values and the Filipino language. Let’s be proud of our race, for nationalism knows no time and boundaries
. 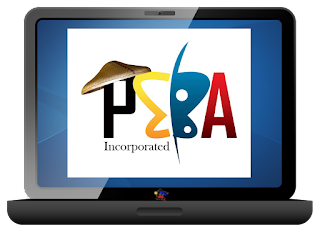 Expats, OFWs and Bloggers, They’re Heroes That Multiplies
To our Global Filipino bloggers, as the curtain rises for PEBA 2011 in celebration of our nation’s historic "Araw ng Kagitingan"; let us look back on the heroes of La Solidaridad - Rizal, Del Pilar, Ponce, Paterno, Jacinto, Lopez-Jaena , etc. who were the Filipinos reformists in Spain who used instead of the sword to campaign for changes in the Spanish-governed Philippine islands through essays, speeches, news articles, and other literary and journalistic forms. Their efforts ultimately led to the Philippine independence from Spain. Today, PEBA invites our bloggers to write and post topics on "Balikbayan" (Returnees), "Homecoming" and the positive "changes" and benefits it brings to their families, relatives and friends, to the community and to our country, the Philippines.
We call on our bloggers worldwide to share their stories - through essays and anecdotes, literary and journalistic forms, videos and photos on their quest for the real change that they want to be - for their own selves, for their families, communities and country on their plan homecoming or recent “balikbayan” experiences that bring positive change to the lives of their love ones. And to our non-OFW bloggers, we seek your talents to share with us your expectations and memorable experiences gained during the homecoming events of your returning family members, relatives or friends.
Like Rizal, Luna and Ninoy, 12 million OFWs have crossed borders to work, learn culture and technologies abroad in their effort to battle poverty in our courtyard; soon they will return and apply their knowledge and wealth to bring the change they want for their families, relatives, communities and country - for heroes never die, they just multiply.

This season will put a challenge to our Global Filipinos to flex its muscles to show that with the unity of its great numbers, it can be a potent force for political change, that OFWs can stop this culture of corruption, exploitation, and fraud and steer our country to greater heights by participating in a mature political exercise by participating in the Overseas Absentee Voting and joining forums and social organizations abroad that promote Filipino values and socio-economic assistance to OFWs and kababayans back home.

To the private sectors that have economically benefited on the remittances and homecoming spending of the OFW and their families; PEBA calls for your support on the advocacy programs and projects of the Government, LGUs and NGOs that promote values and welfare of the OFWs.

PEBA calls on POEA and OWWA to improve its reintegration program for returning, retiring and displaced OFWs. We ask this administration to restore an estimated 46 percent budget cut to the Department of Foreign Affairs 2012 budget and to increase funds to assist OFWs in Japan and the Middle East countries.

As the quarter storm closes, we prayed and mourned for the loss of our OFW compatriots, Sally, Ramon and Elizabeth who were executed in China. A painful lesson for every Filipinos to be careful and not to allow ourselves to be used as drug couriers.
Hundreds of OFWs are still missing in New Zealand after a devastating earthquake hit the country. In Japan, the horrifying series of earthquakes and tsunami that swept the Japanese shores where hundreds of OFWs are still unaccounted for and the continuing threat of radiation exposure remain an unending nightmare to the survivors.
Posted by The Pope at 2:58 PM 4 comments: