Philhealth: A Bitter Pill For OFWs 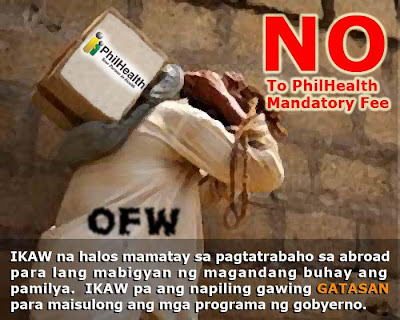 The OFWs around the world have joined hands within Pinoy Expats/OFW Blog  Award (PEBA) and have  waged an all out war through social media flatforms in the internet against the premium increase of Philhealth from the current P1,200 to P2,400 which will be "slapped" to all OFW prior to leaving the Philippines.

Personally, I see the abrupt increase not only unreasonable, unfair and unconstitutional as it defies Republic Act No. 10022, or the Amended Migrant Workers Act of 2010, prohibits increases in government fees for services rendered to OFWs and their dependents.

Second, the "mandatory policy" imposed by the Goverment to all OFWs to pay Philhealth as a pre-requisite condition prior to departure is a clear extortion curtailing the right of each OFW to travel.

Malacanang and its key departments such as DOH and POEA played "blind, dumb and deaf" to OFWs protests because Philhealth is one of Pnoy's major flagship to please World Health Organization (WHO) who has been critical and expressed concern over the continued absence of sufficient healthcare coverage in the country".

The WHO's unsolicited remarks was a fatal blow to the government which substantiate the DOH's failure on implementing an effective Universal Health Coverage Program as one of Pnoy's health agenda.

To save the ailing Universal Health Coverage, the government tries to institute reforms through Philhealth with its ambitious target to enroll 11 million indigent families by targetting workers from the informal economy. However, Philhealth's target proves futile as its individually paying program fails due to its voluntary in nature.

To ensure success in expanding Philhealth's coverage, it partnered with POEA as it identified the OFWs as an easy target, a fragmanted group that lacks a solid representation in both labor and political society. Thus, Philhealth becomes a bitter pill that was forcibly prescribed by POEA to all OFWS which adds insult and demeans the intelligence of the so called "Bagong Bayani".

The government has made a mockery on the Amended Migrant Workers Act of 2010 (Republic Act No. 10022) which prohibits increases in government fees for services rendered to OFWs and their dependents.

I laud Senators Recto, Pimentel and Villar on their separate calls for a Senate inquiry on the constitutionality of Philhealth's sharp premium increase from P900 - P2,400 per year.

There were number of frauds and controversies which have cast shadows of doubts on Philhealth's administrative leadership and affecting genuine reforms.

While I admit that our country needs a sustainable, affordable and progressive social health care encompassing the entire nation and I accept the fact that families have benefited from Philhealth program.

However, it cannot be denied that there are also OFWs who will never benefit from Philhealth because of a better health care program that either they have already availed of or have been provided free health care program by their foreign employers which covers his dependents, or some OFWs who have no beneficiaries at the availment of mandatory Philhealth membership.

My stand is that Philhealth should be implemented fairly and squarely, in a "voluntary" individual membership policy allowing the Filipino people to breath the air of freedom to discern and decide which health care is best for him and his family. If Philhealth claims that it has the best health insurance program, then it should not be afraid to sell its product to the masses on a voluntary scheme.

We always say "bawal magkasakit" and before sickness strikes, we should prepare ourselves with either a personal health and medical insurance or enough savings in the bank. Pero tila mas lalo kang magkakasakit emotionally kung pipilitin kang magbayad ng Philhealth na hindi mo mapapakinabangan for one reason or you simply do not trust or frustrated on their services.


I SAY "NO" TO PHILHEALTH'S  MANDATORY MEMBERSHIP FEE POLICY.


Note: The image was downloaded from from the FB Page of Global OFW Voices
Posted by The Pope at 7:18 PM