In celebration with the outstanding partnership of PEBA, Inc. and Nokia for the upcoming event PEBA 2009 Awards, and in collaboration with KABLOGS co-bloggers - AZEL in Panunumbalik ng Ulirat, Rio in Bizjoker-of-the-Philippines, & Reymos in My World Is Getting Smaller Every Day and the OVI Blog community, I am featuring The Scream, my favorite painting in the world as my shared blog for Nokia's OVI Historical Tweet. 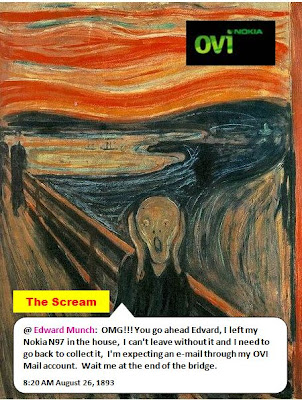 I can see true emotion used here, every possible feeling that one may have is screaming out of this painting. Its like a magnificent ray of fireworks, the most powerful colors are used to portray rays of emotion that actually reach out and call to you. I could stare at this painting for hours and never truly understand it, its strength is moving.

Painted in 1893, The Scream is Edvard Munch's most famous work and one of the most recognizable paintings in all art. It has been widely interpreted as representing the universal anxiety of modern man. Painted with broad bands of garish color and highly simplified forms, and employing a high viewpoint, the agonized figure is reduced to a garbed skull in the throes of an emotional crisis. With this painting, Munch met his stated goal of “the study of the soul, that is to say the study of my own self”. Wikipedia

According to speculations by astronomers, the red sky Munch saw, might have been the result of an 1893 volcanic eruption of Krakatoa. Psychiatrists on the other hand, have a different version to offer. They believe that the pain and agony the lone character in "The Scream" experiences, is an outcome of the tragic childhood, Edvard Munch had. According to them, the painting could be an outpour of all the pain he experienced, which included disease, death, and insanity.
The Scream has been the target of several high-profile art thefts.In the late twentieth century, The Scream acquired iconic status in popular culture. Scream has been used in advertising, in cartoons, such as The Simpsons, and films and on TV. Ghostface, the murderer in Wes Craven's Scream horror movies, wears a Halloween mask inspired by the central figure in the painting. Reproductions of this mask are now common masks in the real world.

And now, The Scream has made a niche in Palipasan, the powerful painting tops up strong emotions, like Nokia, its strength is moving, it connects, it touches.
Next time you discover your Nokia mobile unit missing,
just S-C-R-E-A-M ! ! !
Posted by The Pope at 10:18 PM